Today, the next installment of the Intergovernmental Panel on Climate Change (IPCC) – the world’s most authoritative body on climate science – was released, focusing on how we can mitigate climate change. It comes on the heels of the IPCC publishing its assessment of the impacts of a changing climate in March 2022. The findings serve as yet another clarion call to the global community that time is running out to avoid the worst climate change impacts.

With each IPCC report published, the science becomes more cemented, yet the emissions continue to climb, impacts mount ever higher, and the calls for action grow ever louder. By the time the next IPCC assessment report is published in several years, the window will either remain open or be closed for limiting warming to 1.5°C. It’s up to us. We decide our future.

1. Greenhouse gas emissions keep climbing: While the rate of growth in emissions has slowed recently, emissions during this decade surpassed that of any previous decade. Since just 2010, emissions rose about 12%. Since 1990, emissions have risen a staggering 54%. Global greenhouse gas emissions are higher now than they have ever been in recorded history. Over the past thirty years, the greatest contributor to emissions growth was carbon dioxide from fossil fuels and industry. And while these emissions fell due to COVID-19, they rebounded quickly in the second half of 2020. While these findings are bleak, it is worth noting that the report states that emissions would have been significantly higher in the absence of climate policies, laws and finance.

Developed countries contributed almost a quarter of global emissions in 2019 (while only housing 16% of the global population). Since 1850 they have contributed 45% of global emissions. However, overall emissions in developed countries have peaked and declined since 2010. Now the lion’s share of emissions growth is coming from emerging and developing countries. Eighty-three percent of the increase in emissions this decade was from Asia and the Pacific. At the same time, many in the developing world still do not have access to electricity and clean cooking. Policies and investments that provide reliable access to clean energy will be critical.

2. Our small remaining emissions budget is blown with existing and currently planned fossil fuel infrastructure: We have already burned through four fifths of our “carbon budget” – the total accumulated amount we can emit while having a reasonable chance of limiting warming to 1.5°C, a goal of the Paris Agreement. And the committed emissions from existing and currently planned fossil fuel infrastructure already soar beyond our remaining budget. Coal must be reduced by 95% by mid-century on average (and coal without CCS must be reduced by about 75% in the next decade); oil by 60%; and gas by 45%.  It will be necessary to explore options to handle these stranded assets, including decommissioning, reduced use, retrofits, and firing with low-carbon fuels. Limiting warming to below 2°C will leave $1-4 trillion of stranded assets, with coal being at greatest risk through 2030 and oil and gas towards mid-century. If we continue to install fossil fuel-based infrastructure, the report notes that we will be locked into a high emissions trajectory.

3. There is a widening gulf between where emissions are headed and where they need to be: To limit warming below 1.5°C with no or low overshoot, net global GHG emissions would need to be reduced on average 43% below 2019 levels (for CO2 48%) in the next eight years, by 2030, reaching net zero emissions in the early 2050s. Currently, however, without strengthening of policies, emissions are actually projected to rise beyond 2025.

The report identifies an ‘emissions gap’ – comparing where our emissions trajectory is headed today vs. where it needs to be limit warming to 1.5°C – of 19-26 Gt CO2e in 2030. By contrast, emissions at the end of 2020 were roughly 57 GtCO2e. That means we are missing a scale of reductions equivalent to about half of today’s emissions.

As a result of this emissions gap, given countries’ current commitments, we are slated to see warming of 2.8C by 2100, and warming could be much higher if we don’t increase ambition. Considering the impacts of just 1.1°C of warming so far – with its associated heat waves, forest fires and intense storms – this will be an unrecognizable world.

4. Emissions need to U-turn and reversing course will require disruptive systems change: All the emissions pathways that avoid the worst climate impacts rely on immediate and steep emissions reductions in all sectors. Moving onto a better path will not be possible through incremental shifts in policy, technology, and behavior. It will require enormous transitions across all major economic systems— energy, transportation, the built environment, food systems, manufacturing, finance, and consumption. The report finds that strengthening near-term action will increase the feasibility of more rapid transformation in the future.

Industry: Reducing industrial emissions, which make up about a quarter of global emissions, will require demand management, energy efficiency, and greater circularity. Many of these practices are in their infancy today.

Cities and buildings: The share of emissions from cities (encompassing several sectors) is now estimated to be 67-72% of global emissions. Reducing emissions from cities will involve smart urban planning, making cities more compact, walkable, and efficient. It co-locates housing and jobs, increases electrification and transitions to low-carbon energy sources while increasing carbon removal through, for example, planting more trees. Both existing and yet-to-be-built buildings can be net-zero emissions by mid-century if they use low-carbon construction materials, reduce demand, and implement mitigation options in design, construction, use and retrofits. Buildings currently make up 6% of global greenhouse gas emissions.

Transport: We will also need to transform how we transport ourselves and goods. Transportation currently contributes about 15% of global greenhouse gas emissions. Phasing out the internal combustion engine and using electric vehicles offers the greatest mitigation benefit. In addition, demand-side interventions, such as shifting transport modes (e.g., walking and public transport), will be essential. Shipping, aviation and freight will require alternative fuels.

Land: In the land sector, which contributes 22% of global emissions, the most significant mitigation potential comes from protecting and restoring land and forestry. Other opportunities come from livestock and crop management, shifting diets, reducing food waste, and others. Scaling such solutions will require overcoming economic, policy, and institutional barriers and managing trade-offs, including competition for land-based resources.

5. Rapid change is possible, but it must be nurtured, and it must be just: Despite the grim emissions trends, bright spots show that non-linear change is not only possible but happening. For example, from 2010-2019, the unit costs of solar and lithium-ion batteries declined by 85% and wind energy by 55%. Deployment of solar has seen more than a 10X increase over the decade, and electric vehicles more than 100X. However, this innovation didn’t happen overnight or on its own; it was promoted through policies targeting innovation.

The report finds that several types of enabling conditions can increase the feasibility of action. These include strengthening policies and institutions, finance, technological innovation, and behavior changes. For example, improved access to financing was found to lead to fast results. In some countries, climate litigation in the courts is now playing a critical role in increasing climate ambition.  A variety of actors – from youth to media to business to indigenous peoples – can effectively influence political support and policymaking. There is no silver bullet to addressing the climate challenge – it’s a puzzle of multiple enablers of change coming together.

Also, it is critical to note that these transformations will have important distributional consequences on jobs and the economy. It will be essential that they are approached in a just, fair and equitable manner. We are starting to see approaches being embraced in countries, such as just transition commissions and related policies, but much more will be needed in the coming years.

However, advancing development that also delivers climate action will depend on finance, and the report shows that current financial flows for mitigation are 3-6 times below what is required this decade to have a good chance of limiting warming even below 2°C.

What does this mean for philanthropy?

The dire warnings of the IPCC lead us to several lessons for philanthropy:

Philanthropy’s special role is its ability to assess risks and take bold action quickly and flexibly. The six takeaways make clear that there has never been a more urgent moment for bold, responsive, and flexible funding. When deploying grant funds, philanthropy needs to think about two things: injecting funds in a way that has true leverage in terms of policy, financial returns, and amplification and how to catalyze systems change. In doing so, philanthropy must focus on the root causes of our problems to create enduring systemic change. At the Bezos Earth Fund, we work with the System Change Lab to help us identify tipping points and priority actions to remove barriers and accelerate change. Effective philanthropy will take care to identify the most promising leverage points that could unlock change.

Given the urgency of the mitigation challenge, philanthropy should steer investments towards the shifts that will bend the emissions trajectory at speed and scale. That means that mitigation portfolios should prioritize sectoral transformations and geographies that result in significant emissions reductions. Philanthropic capital should also be deployed to avoid and reverse the lock-in of carbon intensive infrastructure.

Additionally, the revolutions required across society – from decarbonizing power to restoring land to redesigning cities – must be embraced in a just and equitable manner, with support for those who will be negatively impacted to ensure these benefits are shared widely.

And philanthropy must be science-driven – informed by the very best evidence from practice and research, such as that laid out by the IPCC. 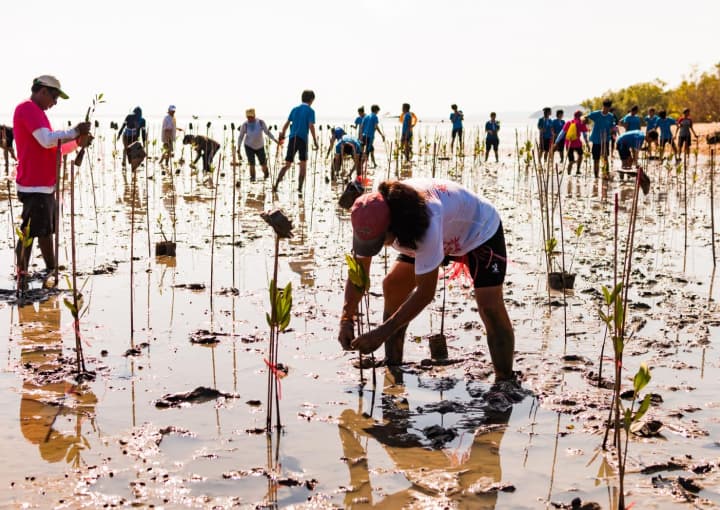 6 Big Findings from the IPCC 2022 Report on Climate Impacts, Adaptation and Vulnerability